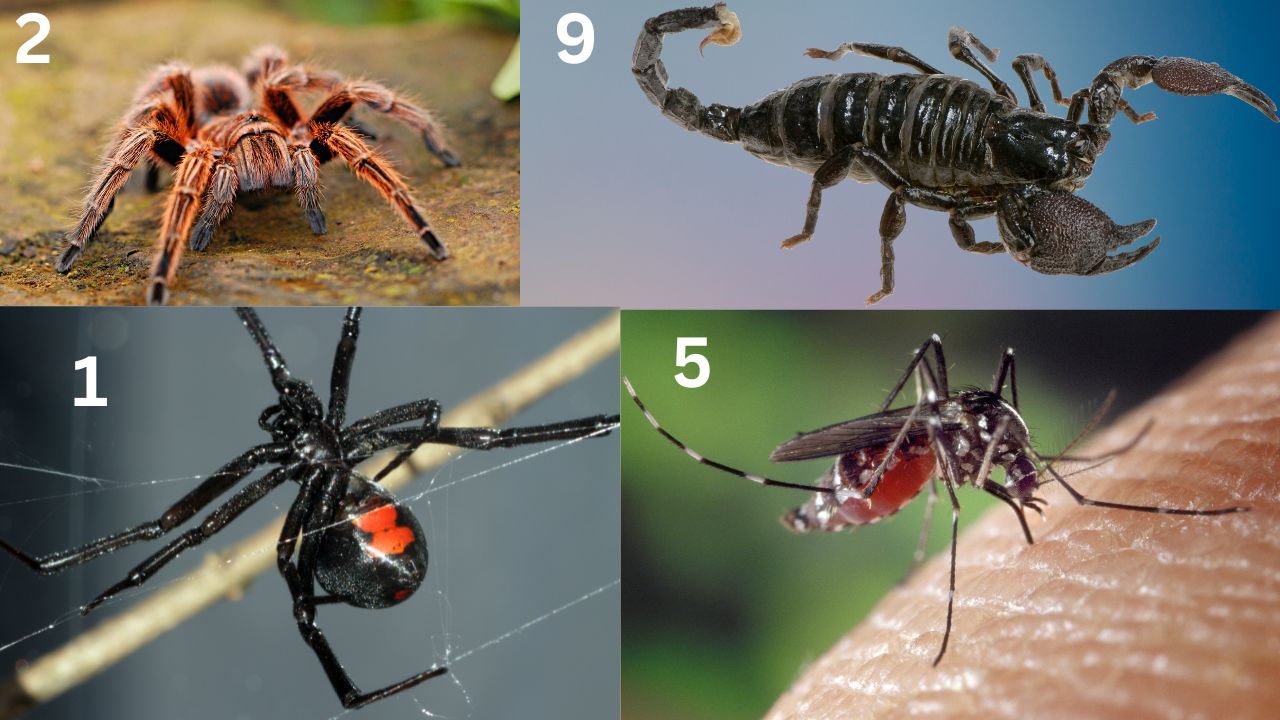 The 10 Most Dangerous Bugs in the World

People are very interested to know which are the most dangerous bugs in the world based on their venom and measure of destruction they cause to humans. We have explained shortly about them and how they harm to humans.

The size of a black widow spider is roughly the size of a paper clip and with the most dangerous venom, which is 15 times stronger than a rattlesnake. This black spider can be identified by the red markings on its belly. The red markings are visible in the shape of an hourglass. They can live for 1–3 years in the jungle and are often found alone.

The Tarantula Spider can grow to nearly the size of a personal pizza, the lifespan of which is about 30 Years. The Most dangerous Tarantulas are afraid of large predators like humans.  But if provoked – watch out! Although their venom isn’t deadly, it can cause rashes and pain at the biting point.

Hornets are dangerous and most easily agitated and sting you even in your eyes. The venom of hornets is very painful, so always stay at a safe distance. They are stronger than bees, and nest in hives just like yellow jackets bees. They are enemies of honey bees forever and catch and eat whenever they find.

Africanized Honeybees are mostly found in the Southern and Southwestern portions of the United States. They often travel in swarms to find a new hive. They don’t randomly attack people or animals unless they feel that they are in danger, bite people to save themselves. If you see a swarm of bees or are near a beehive, it’s important to move away from the area quickly.

In every part of the world, more people died by mosquito-borne illness than any other factor. Mosquitoes can spread different types of encephalitis; also, can transmit heart worms to domestic animals like dogs and cats. So, it’s a danger for us, even in the United States. 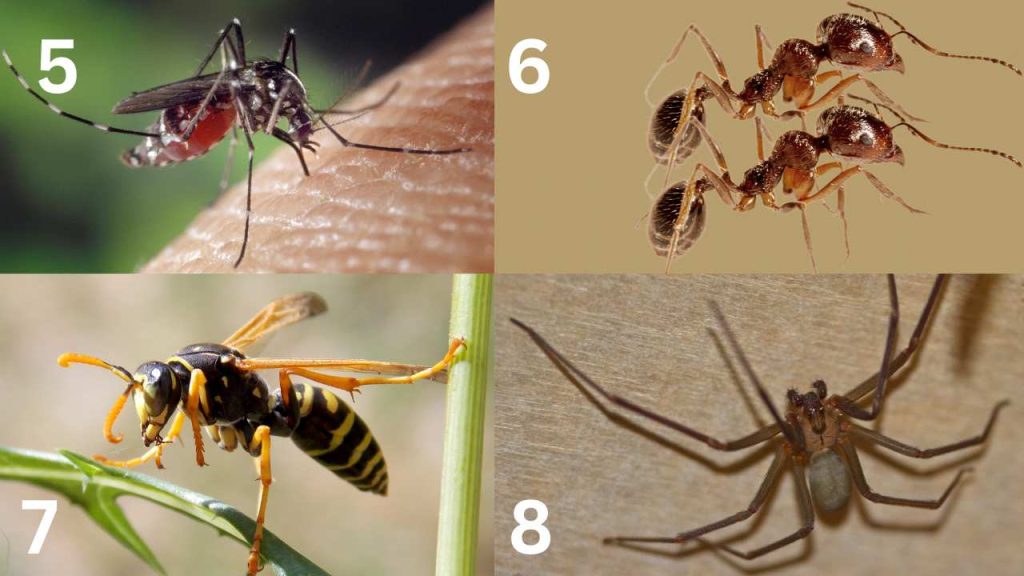 Red fire ants are about 1/2 (half) inches long and brought accidentally by ship from South America. They are a robust type of ants that can sting, and their stinging is very painful. Usually, they are found on golf courses, at picnic grounds, and at playgrounds, even in your backyard.

Wasps are similar to yellow jacket bee, but stronger than bees. Usually, they have a slender, and shiny body. Unlike Honeybees, when wasps sting anybody, they do not lose their stinger, which enables them to sting their victim repeatedly. Here’s how to identify the different types of and bees. 10 Broad shorts of honey bees.

Brown Recluse Spiders are native to the Midwestern and Southern United States. They can be deadly, specially to the children under the age of 7. They look a violin-like shape on their back. Also, they can range in color from brownish-tan to yellow-tan. The most dangerous Brown Recluse Spiders only bite when it is excited.

Scorpions have a crab-like appearance, are predatory and often come out at night. Scorpions like warm, and dry climates and are most often found in deserts. So, precautions are necessary when you go for hiking and camping. Keep your shoes, blankets, and towels in secured indoors. Their stings can feel much like a Honeybee sting with mild swelling or a rash, or may be sometimes more serious.

Millipedes are not poisonous, but they carry venom that can cause an allergic reaction in some people. Centipedes also carry venom. Although their venom is not deadly, it can be toxic to people who are allergic to other types of insect venom. Both of centipedes and millipedes are worms, like to live in wet climate.

Names of Insects for Kids

Here are 12 names of insects for kids.

Butterfly is an insect, very beautiful with different colors, living in trees and flying from flower to flower. They are known to never bite or disturb people. They are harmless insects.

Bed bugs are oval or elliptical shaped, brownish, living in or around the bed, bedsheet, clothing, sofa and furniture etc. Usually, they bite at night when people are sleeping.